Plans for an arts and culture hub in the heart of Loughborough have received a £1.6 million boost from Loughborough Town Deal.

The Town Deal Board has confirmed the funding to support the Generator project which will bring a derelict hall in Packe Street back into use for the arts.

It is one of 11 projects Loughborough Town Deal is backing after securing £16.9 million of Government funding. In total, the projects are worth over £40 million of investment for the town. Cllr Morgan said: "We are delighted to be able to confirm the funding for the Generator project. This is a truly fascinating and unique building in the heart of Loughborough.

“It has a wonderful open space that lends itself to the arts scene and while it will support the creative community, it will also bring more footfall into the town centre and have an economic impact as well.”

Dr Kotecha said: “The Generator really showcases the variety of projects being supported by Loughborough Town Deal and I was really pleased to visit the building and see the raw potential that it possesses.

“The project team are clearly passionate about the Generator and what it can achieve, and we look forward to seeing it develop.

“Arts and culture are an important part of Loughborough’s social and economic fabric.”

The project is being led by Loughborough Generator Community Interest Company (CIC).

The town deal funding will support the renovation of the old Generator Hall, a 1930s building which was originally home to diesel generators that powered the then Loughborough College's many town centre departments. 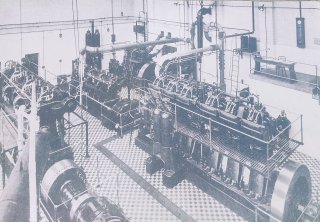 David Pagett-Wright, Chair of the Generator Loughborough CIC, said: "The Town Deal funding has given us a tremendous boost. We are so pleased to be part of it.

“The Generator Hall will become the multimedia arts venue that the community of Loughborough and the wider area needs.

“It will become a cultural hub that will deliver performances, exhibitions, gigs, workshops, lectures and debates, festivals and heritage events, school visits and community engagement. We envisage a dynamic and multifunctional space serving all Loughborough communities.”

Next door to the former Generator Hall is a former art and design college building which is also part of the overall Generator project. Its renovation has been funded separately and is now home to creative industries including Ohh Deer, Cotton Clara and Our Neighbourhood. Public, a coffee shop and bakery, is on the ground floor.

So far, Loughborough Town Deal has committed to invest:

Combined with the Generator project, that brings committed Town Deal investment in Loughborough so far to around £8.5 million.