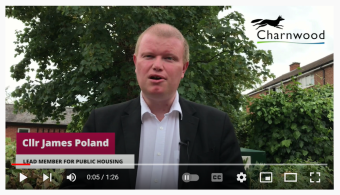 Charnwood Borough Council has published a new customer engagement strategy to improve the way the Council involves tenants and leaseholders in shaping its services. In this short video, lead member for public housing Cllr James Poland talks about the.. New strategy to engage with tenants and improve services

A fresh commitment and strategy to help engage with tenants has been made by Charnwood Borough Council. It has published a new customer engagement strategy to improve the way the Council involves tenants and leaseholders in shaping its services. The.. Loughborough has struck gold once again in the East Midlands in Bloom awards. The town was awarded with the highest recognition in the ceremony which was held at Loughborough Town Hall on Wednesday September 21. It is the eleventh time since 2011.. Flowers left in memory of Her Majesty Queen Elizabeth II at the Carillon Tower in Queen’s Park in Loughborough have been collected. The Mayor of Charnwood, Cllr Jennifer Tillotson, joined the Council’s open spaces partner, idverde, in removing.. A Thanksgiving service in memory of Her Majesty Queen Elizabeth II took place in Loughborough on Friday September 16. The Mayor of Charnwood and residents attended the service at All Saints with Holy Trinity Church. The service included a number of.. Council customs during period of mourning

When we are in a period of national mourning, the Council has a range of customs it introduces, some of which date back many hundreds of years. For example, Councillors will wear black armbands for some events and meetings that take place. The.. Following the passing of Queen Elizabeth II, Councillors, including the Mayor of Charnwood have shared their memories of meeting Her Majesty or their memories of the longest serving monarch. Below we have two stories and a video from Cllr Mary.. Buildings illuminated in purple in memory of Queen Elizabeth II

Charnwood Borough Council's offices in Loughborough and Loughborough Town Hall have been illuminated in purple in memory of Queen Elizabeth II. The buildings will remain lit up in the evenings until after the funeral. Books of Condolence remain open..

The Council has been marking the death of Queen Elizabeth II and the Proclamation of King Charles III. Here is some information about further events and service changes during the national mourning period. A Civic Thanksgiving Service is being held.. Residents invited to join Thanksgiving service for Her Majesty The Queen

A Thanksgiving service of the life of Her Majesty Queen Elizabeth II will be held in Loughborough on Friday, September 16. Residents are invited to join the Mayor of Charnwood for the service at All Saints with Holy Trinity Church in.. Deputy Lieutenant, for the County of Leicestershire, Dr Nik Kotecha, welcomed residents to Queen's Park in Loughborough, ahead of the local reading of the Proclamation before handing over to the Mayor of Charnwood. In this video below, you can watch.. 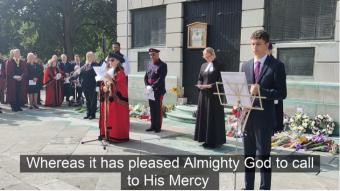 Video: The Mayor of Charnwood reads out the local Proclamation

Crowds gathered to hear the reading of the Proclamation of King Charles III at Queen’s Park in Loughborough on Sunday, September 11. The historic moment was witnessed by hundreds of people who attended the service at the Carillon Tower. The Mayor.. Video: Mayor of Charnwood reflects on reading the local Proclamation

On Sunday September 11, 2022, the Mayor of Charnwood, Cllr Jennifer Tillotson read the local Proclamation for the new sovreign, King Charles lll at the Carillon Tower in Queen's Park, Loughborough. In this video, the Mayor talks about the pride of.. Crowds gathered to hear the reading of the Proclamation of King Charles III at Queen’s Park in Loughborough on Sunday, September 11. The historic moment was witnessed by hundreds of people who attended the service at the Carillon Tower. The Mayor.. Proclamation service to be held in Loughborough

A service to mark the local reading of the Proclamation of the new Sovereign will be held in Loughborough on Sunday. The Proclamation of King Charles III becoming the new monarch will be read by the Mayor of Charnwood, Cllr Jennifer Tillotson, at 2pm.. Our thoughts are with the Royal Family A Wellbeing Café in Loughborough has received £3,500 through a community grant awarded by Charnwood Borough Council. The café is one of the many activities delivered by Loughborough Wellbeing Centre at its new venue at Asha House on Woodgate and.. In this short video, a Quorn resident and parish councillor Jane Hollingworth, talks about discovering a letter her late father wrote to the Echo in 1970. Peter Gamble, who also lived in Quorn was passionate about nature and wildlife sadly passed.. A local resident has shared her delight after discovering her father’s wish to restore the Outwoods in Loughborough is becoming a reality. Jane Hollingworth, a Quorn Parish Councillor and volunteer for Quorn in Bloom got in touch with the borough.. Over 50 good causes are continuing to be supported by the Charnwood Community Lottery as it marks its fourth birthday. Charnwood Borough Council launched the community lottery in 2018 and since then, over 145,000 tickets have been bought and £87,000..