“I was invited to attend Buckingham Palace in February 2009 to receive the MBE for services to the Community. I was accompanied by my family for support as I was very nervous. Upon arriving I was directed to a beautiful room where other recipients were gathering. Soon, a member of the Queen’s staff arrived and took us through what would happen when receiving my MBE. 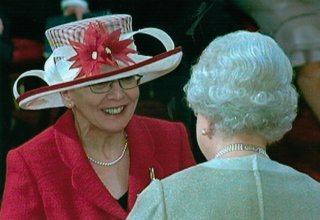 "When my name was announced I walked forward, turned towards the Queen who placed the MBE on the pin on my jacket. She was looking very happy and asked me to tell her about my work, starting with being a school governor for 17 years which I did, explaining the many challenges. She then asked about my interest in housing,  which I was pleased to do explaining how the Decent Homes Scheme helped tenants, how wet rooms were such a benefit and lots more. It did seem a long time chatting, which my family confirmed after.

"We then walked out of Buckingham Palace and so many people outside gathered around wanting to know what it was like talking to the Queen as well as lots of photos taken. In all it was a day to remember made special, by my family being with me.”

“My very first childhood memory, age almost 2 years old is of the coronation. Of course, it is imprinted on my memory because it was the first time, I had seen television, but I do remember a grainy grey procession.  I was sitting on the floor in my auntie’s sitting room, which was full of people - I assume friends, neighbours and relatives.

"A couple of years later the Queen visited my hometown and I remember having my best clothes on and having a flag to wave.  I was standing on a wall and this big black car went past in a flash but they are my two earliest memories of Her Majesty.”

Cllr Taylor met Her Majesty Queen Elizabeth II at an opening event in Cambridge in 2005. Watch her tell the story about what it was like to meet the Queen and what the Duke of Edinburgh said to her Mother.