We’re running a series of Service Spotlight features which shine a light on the Council’s many different teams as we attempt to explain a bit more about what we do.

This time it’s the turn of the CCTV team.

There are nearly 250 cameras which cover Charnwood and there’s a small band of dedicated operators who not only keep watch 24 hours a day but often turn super-sleuths to help police hunt down suspects.

The team are led by CCTV manager John and we also spoke to CCTV operator Mo.

So, as a CCTV operator, do you basically watch telly all day?

John: Pretty much, yes, that’s the bulk of the job but there so many skills involved. On a basic level, the operators watch the monitors in the control room and flick between cameras across the borough (we have 244 cameras but about 40 screens). If they see anything which looks suspicious they can contact police or just keep an eye on situations in case something does happen and it’s later needed in court.

We have radios in the control room which link us to police officers on the ground who can also ask us to look at something. We also have the retail radio so shops can contact the operators if they see something suspicious or if there are shoplifters in town.

However, what I have learned over time is that the operators become very adept at spotting suspicious behaviour. They look at people hanging around for no reason or people who seem to be on the lookout for others.

It could be someone loitering who has two phones and one is a cheap pay-as-you-go phone, what some call a burner. Or perhaps it’s a bike left outside a shop which is not locked up as though someone might want to make a quick getaway. Sometimes it’s all perfectly innocent, but sometimes it’s not and they develop an instinct for when something just isn’t right.

You then also have ‘familiar faces’ who have been involved in past incidents so they will tweak our curiosity.

Is there some detective work involved at times?

This is one area that has grown so much over the years. Our morning shift tends to do ‘the reviews’ from the previous evening. This is when police ask us to look at cameras near incidents that happened the night before.

It could be a fight, a burglary or something more serious and we can look at footage to see who was in the area at the time. It doesn’t have to be exactly where the incident took place but we can spot people or vehicles that were in the general area at the time. It can often be another piece of evidence used to build a case.

John: Our operators have become so good and experienced that we know many of the familiar faces in the borough very well. Even without zooming in, our operators can pick out well-known individuals from quite a distance. They may put hoods up, but we can often tell who they are by the way they move or walk.

Trainers are a good giveaway. People tend to change clothes, but often the trainers remain the same.

We’re also very good on faces. We had a case recently where someone was wearing a motorcycle helmet but we got a good shot of the eyes and our operator was able to identify the person just from the eyes.

The police are using us more and more because we can identify people so quickly.

The best piece of equipment we have is the operator. No doubt about that.

Does this sort of work take time and determination?

John: Yes. The operators are like a dog with a bone at times. If police have dealt with an incident, they may want us to review footage in the area which can mean looking at hours and hours of footage from multiple cameras. It takes time and determination, but the operators are committed to what they are doing. And the results are worth it, particularly if we are helping to build a case against someone who has committed a crime.

John: I remember when I first started 14 years ago and I thought it was going to be a bit boring and I wasn’t sure how much impact CCTV could have. Then on my very first shift I saw something which didn’t look quite right so I kept an eye on it. Sure enough a fight was starting and then someone produced a machete. Yes, a machete. I quickly contacted the police and they were there rapidly to make an arrest and prevent the situation from escalating.

I wouldn’t want to over-dramatise the situation, but that could easily have gotten a lot worse if it hadn’t been spotted and the police hadn’t been there so quickly.

Thankfully such incidents are rare, but we are ready to react and deal with them if they occur and I knew from that moment how much of a difference the CCTV team could make.

There are many notable incidents which have involved the CCTV team.

Mo: I once spotted a parked van in a street early one morning and there were several people loading it really quickly with black bin bags.

They had other people on the street and they looked like they were watching out for something. It clearly didn’t look right so I notified the police and they were on the scene really quickly and arrested the gang. It turned out it was a cannabis factory and they were loading cannabis into the vehicle.

On the face of it, they were just loading a van, but it all looked wrong and suspicious.

John recalls another incident: We had a case where a woman was stabbed and very badly injured. One of our operators reviewed all of the footage from the cameras where the incident took place. He spotted the woman walking through town and at the very last point where you see the woman a man goes past on his bike. He noticed that the bike seat had a bit of sponge missing from it.

He then looked back at the scene when the incident took place and there was a guy on a bike with the same piece of sponge missing from the seat. We were able to get an image of him. He was later tracked down arrested and jailed for what was quite a horrific incident. It was an incredible piece of work by the CCTV operator.

Are there ever any difficult moments?

John: There are some difficult moments and we do see all sides of life on the cameras, particularly in the early hours of the morning.

Operators also on occasion witness some very difficult incidents, including occasions where people have taken their own lives, so it can be very tough.

You also see some things happen in real-time and you worry for people’s safety. We’re not the police and we really appreciate what they do for the public. They are putting themselves in real danger to protect people and they have our utmost respect. We are proud if we can help them do their job more effectively. The partnership working between the Council, police and others like the shops, Love Loughborough is really special and makes a huge difference to public safety.

We try to be very supportive as a Council and a team to our colleagues.

How has CCTV changed?

John: The pattern of life has changed. It used to be that through the day we would be dealing with shop thefts in the town centre and then it would turn into incidents outside pubs. And then kicking out time at the pubs and clubs would also mean more chance of there being incidents.

But life has changed. Pubs now stay open longer and shut at different times, and there are fewer clubs.

We are now spending a bit more time looking at areas outside the town centre for perhaps some drug activity and anti-social behaviour. Sometimes these things can seem like small incidents but they can be connected to larger crimes such as county lines (where illegal drugs are transported from one area to another, often across police and local authority boundaries, usually by children or vulnerable people who are coerced into it by gangs).

Can you put cameras anywhere?

John: Quite simply no. There are laws which govern CCTV and they are there to ensure cameras are only placed where there are reasonable grounds for them to be there and they don’t infringe on people’s privacy.

There has to be a genuine need, such as a significant number of incidents that have taken place.

We keep footage for 28 days unless someone like the police ask us to retain some footage.

After that, it is automatically recorded over.

Our cameras are not the newest but we have some HD ones. They are not cheap to install and as I’ve said, you can’t just put them anywhere. Our biggest asset is not the cameras, it’s the operators.

Would you recommend being a CCTV operator as a job?

John: It’s very rewarding. I think CCTV may have been an afterthought in the past but not only are we dealing with real-time incidents, we’re also helping police solve crimes.  There is never a dull moment and you get huge satisfaction from knowing you are helping to keep people safe.

Mo agrees: It’s very interesting and rewarding. We work well as a team and every day is different.

Does it ever get a bit boring?

The view from police

Insp David Stokes, of Charnwood Police, said: “As the Charnwood NPA commander, our commitment to the public is to build confidence with them.

“This includes ensuring that we deal with crime in an effective way, working alongside partners and the public.

“In my first two weeks in post, the Charnwood CCTV team identified 13 suspects, involved in crime.

“Only recently they also reported a baby who had become unwell in the town centre. They quickly called for paramedics and police support with a defibrillator.

“The skills of the CCTV team are second to none and the impact on policing is nothing short of incredible. I was honoured to award the team with a policing award in September.” 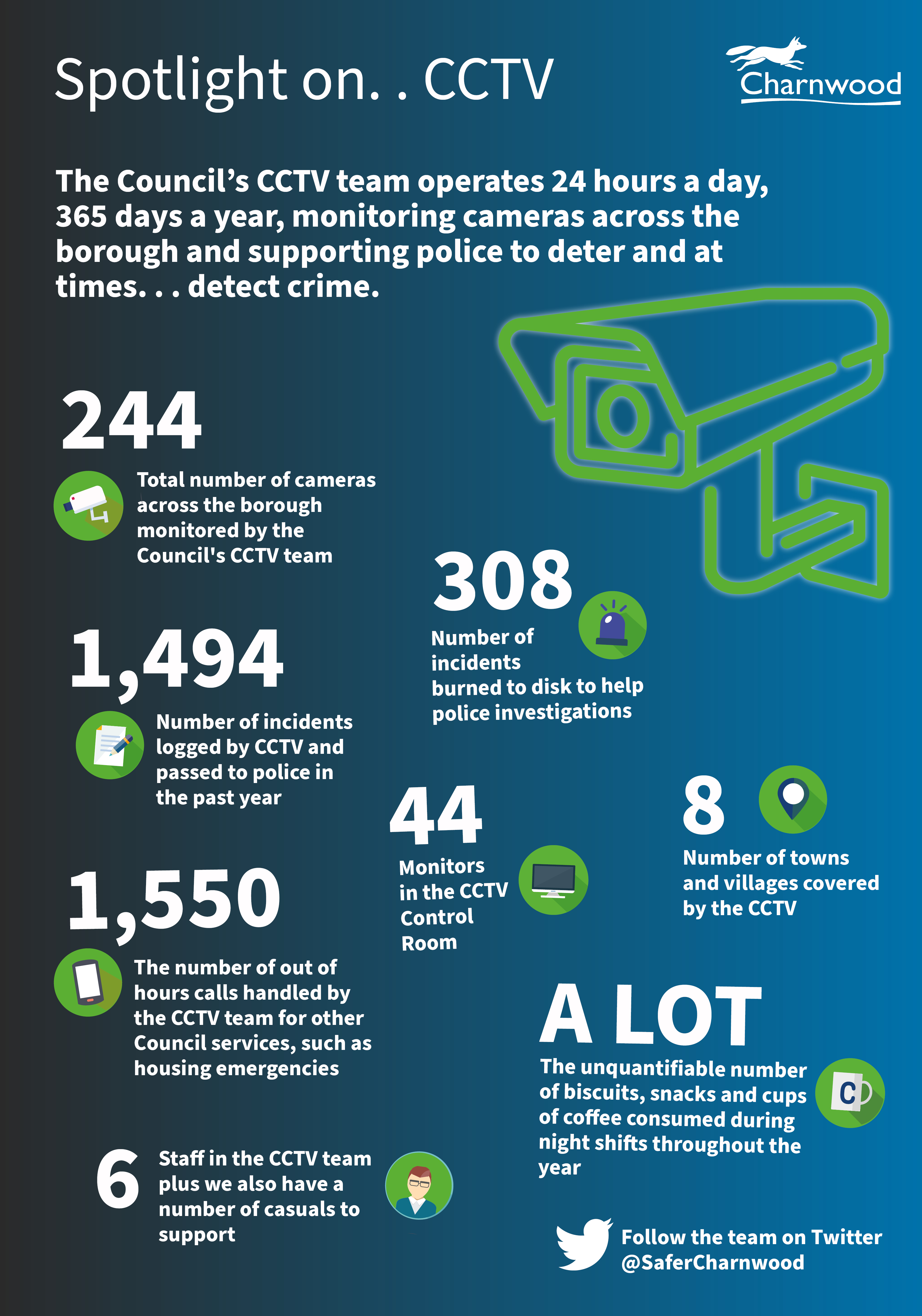