It may be a bit late, but I’d like to wish Charnwood residents a Happy New Year and all the best for 2022!

I have launched this new feature to provide residents with regular updates on Council issues. Sometimes it will be in writing and on other occasions we will be using video.

It’s all about communicating with residents and local businesses, which is vital. As ever we will also be listening and we are more than happy to hear your comments. 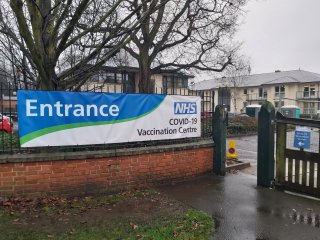 I’d like to say a massive thank you to everyone in Charnwood who has received their Covid-19 vaccination jabs and are doing their bit to protect themselves and others.

As of January 2, 85% of over 18s in Charnwood had received their first dose, over 82% their second and over 60% had received a booster or third dose.

That’s a great achievement. However, it does also mean there are still thousands of people in Charnwood who have not received the booster or been vaccinated at all. The vaccination is by far the best protection against falling seriously ill with Covid and ending up in hospital.

The Council is proud to have been able to support the vaccination programme – surely one of the nation’s greatest successes in modern times. The vaccination centre opened at the Council offices in December 2020 and was one of the first to be announced in the country.

Since then, thousands of people have been jabbed and that work is continuing.

My heartfelt thanks to all the NHS staff involved who have run the centre, seven days a week at times.

They have been ably supported by a number of volunteers who have turned up each day, in all weathers, to help other people. They have helped make the process as smooth as possible, comforted those who have a few nerves and generally made the whole process better for everyone.

Some of them have completed hundreds of sessions and they are extraordinary individuals with an immense sense of civic duty. Well done. 2022 is set to be another busy year and we will see the completion of a number of significant projects.

The Bedford Square Gateway Project will bring a new lease of life to that part of Loughborough town centre and make it vastly better for visitors and businesses. You can already see the improvements it will make to the street scene and with wider pavements, make it a much better place to walk around. Parking has also been retained.

The new Nanpantan Road Cemetery is also nearing completion and is important to the town in many respects. We have worked hard to make it an area for peaceful reflection.

Loughborough Town Deal is also gaining momentum and several projects will move forward this year, following on from the successful opening of the Careers and Enterprise hub in the town centre last year. The Town Deal projects are worth over £40 million of investment into the town.

And we only recently opened the Visitor Centre and Café at the Outwoods which is proving to be really popular.

I am sincerely hoping we are moving more towards the ‘new normal’ this year and there is genuinely lots to be excited about in Charnwood.

The Loughborough Shelthorpe by-election took place on January 20 and I would just like to welcome our new Councillors Beverley Gray and Anne Gray to the Council. They follow closely after Cllr Ian Williams was recently elected for the Shepshed West ward.

A warm welcome to you all.

One of the vacancies in Shelthorpe was created following the sad death of Cllr Gill Bolton. Gill was a passionate advocate for residents and will be sadly missed by all members of Charnwood Borough Council.