The Covid alert level for Charnwood when national restrictions end at 00:01 on Wednesday December 2 will be Tier 3 (very high). Full details at www.charnwood.gov.uk/coronavirus_restrictions.

For details of the Covid-19 national restrictions up until December 2, changes to Council services, and support available for residents, council tenants and businesses, visit www.charnwood.gov.uk/restrictions.

The 2016 theme embraced the RHS theme of ‘Greening Grey Britain for Health and Happiness’. After months of hard work, Loughborough was awarded gold and crowned Best Small City in the East Midlands in Bloom awards.

Councillor Hilary Fryer, Lead Member for Leisure and Open Spaces, said: “I would like to say a big thank you to all partners, volunteers, officers and others who have shown great enthusiasm, hard work and imagination this year.

"The community groups and businesses have really excelled themselves and I have received many comments from residents and those visiting Loughborough as to how very beautiful everything has been. Queen’s Park has never looked better; this is a fantastic achievement  for Loughborough and everyone involved.” 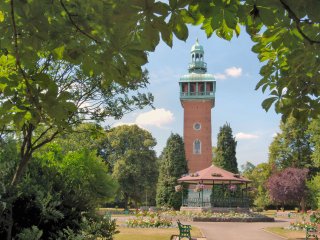 Our partners Quadron and Serco were given a judges' award for their continued support of Loughborough in Bloom and Queen’s Park won the TDP Limited East Midlands In Bloom award for Horticultural Excellence in Parks.

Clear Cut Conservation won the Most Inspiring It’s Your Neighbourhood award and Quorn picked up silver in the Small Town category.