Lanes and Links project including the Hope Bell

It will bring improvements to Old Bleach Yard and Devonshire Lane which link the park to the town centre via Granby Street car park.

The project also includes plans to create the Hope Bell, a lasting memorial to all those in Charnwood who have lost their lives in the Covid-19 pandemic and a tribute to NHS and key workers. It will also be a beacon of hope for the future and a reminder of how communities came together to support each other in challenging times.

It will be cast by Loughborough’s world-famous Taylor and Co Bell Foundry – the last remaining bell foundry in the country.

The project is being funded by Loughborough Town Deal which has secured £16.9 million of Government funding. It is backing 11 projects in total which will bring in over £40million of total investment.

What is the Lanes and Links project?

Overall, the Lanes and Links project will: 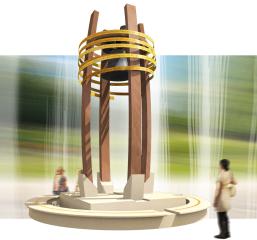 The Hope Bell will see the creation of a clock chime installation comprising four quarter chime bells and the main Hope Bell to sound the hours.

Loughborough is world famous for bells as it is home to the last major bell foundry in the country – John Taylor and Co in Freehold Street. Taylor’s will be producing the bells as they did for the Carillon Tower in Queen’s Park which celebrates its 100th anniversary in 2023.

All 47 bells in the Carillon were made by Taylor’s which has also made bells for churches, cathedrals, universities, and public buildings in countries across the world.

The inspiration and consultation

The Council suggested creating a memorial to mark the impact of Covid-19 on our communities in 2020.

As Loughborough is home to the last major bell foundry in the country, using a bell seemed an obvious choice as not only could it be a memorial, but it could also be a beacon of hope and further highlight Loughborough’s unique heritage for bell-making.

After this initial idea for the Hope Bell, a series of consultation events and meetings were held with the community to gather people’s views.

With the support of Vertigo Creative, the Council has held online surveys, in-person consultation events in Loughborough Town Hall and online meetings with members of the public. We have also held meetings with stakeholders including the Friends of Queen’s Park, the Town Deal’s Consultation and Engagement Group and the Member Reference Group.

Once we had compiled these views and opinions, Vertigo Creative developed a design. 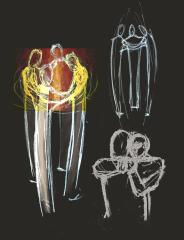 The design of the Hope Bell has been inspired by the impact the Covid-19 pandemic has had on people’s lives and how while it kept us all apart, people came together to support each other.

One of the many things people said during the consultation was that, during the pandemic, they missed that close connection with others and being able to hug their family and friends. 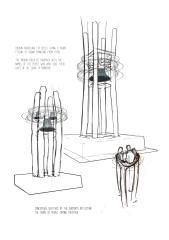 And whilst the Hope Bell is going to be a memorial, the final design also reflects hope and a brighter outlook for the future.

The design created by Vertigo comprises four pillars leaning inwards to reflect people coming together or hugging if you like. The four quarter bells and main Hope Bell are supported by the pillars.

A band of gold-coloured metal will be wrapped around the top, encircling the bells, and giving a visual feeling of sound emanating from them.

The base will be made of stone, possibly Portland stone, which is a light-coloured high-quality stone. Portland stone was also used for the construction of the nearby Carillon Tower so the Hope Bell will complement that war memorial.

The quarter bells will chime to mark each quarter hour and the Hope Bell will strike on the hour.

The Hope Bell structure will be around seven and a half metres tall. It will be a clock chime installation so will have five bells in total, four quarter chime bells and the main Hope Bell.

They will be made of a special type of bronze called ‘bellmetal’ which is an alloy of copper and tin.

The furnace at Taylor and Co is heated to 1,000 degrees centigrade before casting.

Once the molten metal is poured into the mould it remains buried in sand for several days to cool gradually.

The bell is then broken out from the mould, cleaned and then tuned before a final polish, a process that can take several weeks.

Three of the quarter chime bells have already been cast and you can see them being made in this video.

Here are some details about each bell

Remembering loved ones and information boards

It is proposed that as part of the Hope Bell, monoliths will be placed near the bell and names of loved ones who have died of Covid during the pandemic could be placed on them. The monoliths are likely to be of the same stone as the base of the Hope Bell. 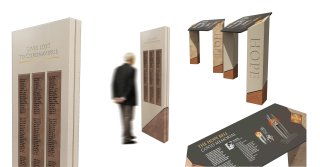 finalised. If this is something you would be interested in, please complete this form (via the button below) and we will contact you at a future date when more details are confirmed.

They would also have the full version of a poem used as part of the Hope Bell.

It is proposed to use a poem as part of the design and story of the Hope Bell. The wording could be inscribed on the metal ribbons at the top and further explained on an information board.

Options are being considered around a poem and whether to use an established poem or create something specifically for the Hope Bell.

The area around the Hope Bell will be landscaped with appropriate plants and foliage.

Location in the park

The Hope Bell will be situated where the Swan Maze is now currently. The Swan sculpture and ornamental wrought-iron gazebo, which was installed in 1992, will be moved. We are currently looking at options, but the Council is keen to locate it elsewhere in the park. The sculpture was created by David Tarver.

See the location on Google Maps

Loughborough Town Deal is providing £669,000 for the Lanes and Links project including the Hope Bell. The Council is also providing £236,000 for the work to resurface the pathways in the park.

Should planning permission be granted, it is anticipated the Hope Bell will be completed by early 2024.