Customers may experience online payment disruptions on Sunday October 9 between 6am and 10am due to essential maintenance. We apologise for any inconvenience caused. 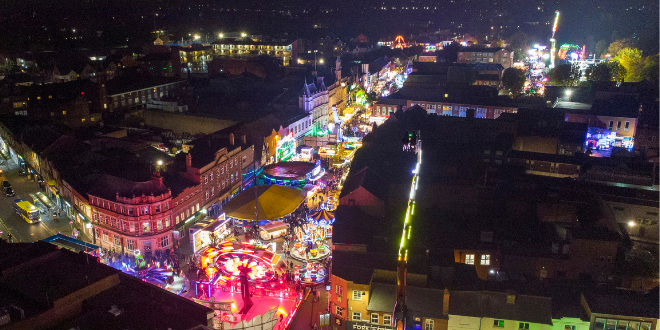 Here is some information about Loughborough Fair.

Loughborough Fair will return in 2022 between Wednesday November 9 and Saturday November 12. Opening times for each day can be found below:

More details will be announced later in the year, but we have put together some frequently asked questions regarding the fair.

Fairs have been held in Loughborough for centuries, the first official Charter being granted to the Lord of the Manor, Hugh le Despencer, in 1221 by King Henry III. The Fair was then held on St. Peter’s Day.

The fair was officially opened at 6pm on Wednesday, November 10 by the Mayor of Charnwood, Cllr Paul Baines, who read the official fair proclaimation from the Waltzer in Market Place.

Photographs from Loughborough Fair 2021 can be found on Charnwood Borough Council's Flickr page.

Rides and stalls at Loughborough Fair