The current Mayor and Honorary Aldermen

We are experiencing problems with the Interactive Mapping System at the moment and it may not work as desired. Technicians and suppliers are working on a solution to this issue, and will hopefully be resolved as soon as possible. Apologies for any inconvenience caused.

From Tuesday January 31, the Council Tax team will be contacting customers via email and text message to encourage them to choose to pay their upcoming 2023/24 Council Tax bills by Direct Debit and to also view their bills online. Full details.

Below are detailed backgrounds of your current Mayor and Honorary Aldermen.

I was born and brought up in Lancashire and moved to Loughborough in 1976 when my husband John got a teaching position at Rawlins Community College. We have two grown up children, Lisa and Dylan and three grandchildren, Thea, Georgia and Logan.

I left school after ‘O’ levels and had a number of, mainly, administrative jobs before moving to Charnwood, when I took the opportunity to go back into education, firstly ‘A’ levels and then a degree at Leicester Polytechnic (which is now De Montfort University).

Following my degree, I worked for Leicester City Council for 20 years in a variety of different roles, finally Assistant Director of Leisure Services, before taking early retirement to look after my Mum, who had moved to Loughborough after my Dad died.

I am a founder member of Stage Left Theatre Workshop, the group is always welcoming of new members, all that is asked is commitment.  My other interests include gardening, cycling and sewing.

It is a great honour to be Charnwood’s Mayor and I am very much looking forward to meeting many local people in the coming year.

I also grew up in Lancashire and after training as a teacher taught at schools in Lancashire and Yorkshire before becoming Head of Drama at Rawlins Community College. I later became an Advisory Teacher, which took me into many different Leicestershire schools, advising and supporting classroom teachers.

I ran youth theatres for many years, based at Fearon Hall, supporting groups to perform locally, at the Edinburgh Festival and to visit our twin towns Schwabisch Hall in Germany and Epinal in France. My last teaching position before my retirement was Head of Creative Arts in Corby.

Also, a founder member of Stage Left Theatre Workshop, the group is working towards performing again after an enforced break due to the pandemic. My other interests include cycling and photography.

I am very much looking forward to supporting my wife Jenni in her year as Mayor. The conferring of the title Honorary Alderman is the highest award that can be made to a former Councillor in recognition of exceptional service to the Council. Honorary Aldermen wear a dark blue robe and support the Mayor on formal ceremonial occasions.

They occasionally undertake social duties at the request of the Mayor and are entitled to process in and take a seat at meetings of Council although they have no vote. 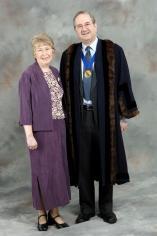 Aldermen Scott was first elected at a by-election on the February 13, 1986 as the Councillor for the Birstall Greengate ward. He continued to represent this ward, being re-elected four times, until May 2003 when e did not seek re-election.

He was at various times a member of the Planning Committee and Plans Sub-Committees 1 & 2 and the Environmental Charter Sub-Committee. He also represented the council on various outside bodies, including the Outwoods Management Committee and was a Governor of Longslade Community College and Highcliffe County Primary School.

He was a member of Birstall Parish Council 1987 - 2003 and was on the Charnwood Local Strategic Partnership Board. He has been Chair of Action for Better Charnwood (ABC)since 1999. He lectures in Public Policy, Public Sector Management and Environmental Politics at De Montfort University.

Aldermen Bush was first elected in 1995 as Councillor for Six Hills Ward and following the boundary changes in 2003, he became Councillor for Wreake Villages until his retirement in 2011.

Between 2000 and 2003, John Bush served in the three party coalition Cabinet and he also served in the Administration between 2007 and 2011, serving in two different Cabinet Lead Member roles, Finance, Resources and Risk Management from 2007 until 2009 and Housing from 2009 until 2011. John Bush was Deputy Leader of the Council between 2007 and 2011 and was acting Leader during Mike Preston’s illness.

Aldermen Tormey served for 24 years as a Borough Councillor, first being elected in 1983 and serving until 1987 and returning in 1991 and serving until 2011. During this time he represented Loughborough Shelthorpe and Loughborough Lemyngton wards. During his time on the council, Joe Tormey was Chairman of many committees, both regulatory and scrutiny. He was Deputy Leader from 1995 until 1999 and recently Mayor of the Borough during 2007/2008.

Outside of the council, he was Centre Manager at Fearon Hall, until he retired in 2007. A family man, Joe

Tormey has three children, and has been supported in his work for many years by Jean. Well known in Loughborough and throughout the borough, Joe Tormey has been an active member of the Charnwood Community for most of his working life, dedicating himself with a selfless and caring attitude.

In proposing the appointment of Joe Tormey to the role of Alderman at full Council in September 2011, Councillor Miah said of Joe Tormey that 'he had electrified the Council Chamber and graced it with his wisdom and charm.'

Robert Shields was elected as a Borough Councillor in May 1983 for the Wolds ward and served as a councillor for 20 years until 2003.  He had played a senior role in the work of the Council under the old committee system and the current cabinet and scrutiny system, and was directly involved in the transition between the two.

In proposing the appointment of Robert Shields to the role of Alderman at full Council in June 2017,  Councillor Slater referred to the different committee appointments that Robert Shields had held, including as Chair and Vice-chair under the committee system.  He explained that starting in 1999 the Council began to change its governance arrangements to the cabinet and scrutiny system and that Robert Shields had played an important part in those changes. Initially he had served as a scrutiny councillor.  From 2000 to 2003 he was a member of the Council’s Cabinet.  For that period all three main political parties were represented on the Cabinet and the role of Leader of the Council, and chair of the Cabinet’s meetings, was rotated on a six-monthly basis.  As part of those arrangements Robert Shields had served as Leader of the Council for three periods between 2000 and 2003.

In supporting the motion other councillors stated that conferring the title of Honorary Alderman on Robert Shields would be richly deserved and referred to the positive outcomes he had secured for the Council and the Borough while he was a councillor and his long connection with the Borough.  Reference was also made to the hard work he had done with the other two parties as part of the three-party Cabinet.

Paul Day began representing Anstey on the Council in 1976 just after Charnwood Borough Council was formed. During this time, he was the chair of health and housing before stepping down in 1988. Paul was re-elected to represent Anstey in 2007 and served another 8 years on the Council. He spent his final year as the Mayor of Charnwood before retiring in 2015.

On 20th January 2020, Paul Day was presented with his scroll, robes and an Honorary Alderman medallion. Cllr Seaton explained how pleased she was that Charnwood Borough Council had bestowed the title of Honorary Alderman on Paul Day. She added that the appointment was thoroughly deserved and that Paul Day will continue to serve the Borough and make a difference to residents in his new role as an Honorary Alderman. Paul Day added that he had lived in Anstey his whole life, being involved with the Parish and Borough Councils for many years and it was an honour to find out he had been considered.