More information on the borough coat of arms

A Level 3 heat-health alert has been put in place by the UK Health Security Agency. Advice and guidance for the hot weather can be found at www.charnwood.gov.uk/heat.

As the weather is expected to reach 30°+ this week, the council’s Severe Weather Emergency Protocol for rough sleepers has been activated, meaning the council are working with partner agencies to identify and arrange emergency shelter for individuals who are rough sleeping. Full details.

The Charter from the Kings of Arms at the College of Heralds describes the coat of arms designed for the new Corporation. 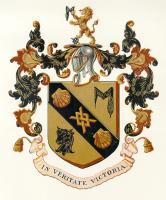 once owned the town, the Despensers, the Beaumonts and the Hastings. The lives of these noble families had been full of interesting little incidents.

The last two Despensers were hanged in 1326. The last Beaumont went mad, and on his death in 1507 his widow married the Earl of Oxford who, by coincidence, had been her husband's guardian. The Hastings interest survived until the early nineteenth century, but Richard III had one of them executed in 1483.

Later members of the family were on the losing side in the Civil War and were obliged to sell large acreages of land in Loughborough and elsewhere to restore their fortunes.

More information on the borough coat of arms

In 1974 the new Borough of Charnwood was granted the use of the Arms, although it is now reserved for official documents and use by the Mayor's Office. The Council use the fox logo for its corporate image.