Our Customer Service Centre on Southfield Road is now open for essential enquiries by appointment only. Please be aware that from August 8 it is mandatory for face coverings to be worn on the premises. More information, including how to make an appointment, in this news story.

The Loughborough mace was presented by Aldermen Marmaduke Barrowcliffe on the occasion of the first election of Alderman under the Charter of 1888.

It is made of silver formed in five pieces, secured around a central wooden pole by the threaded pieces at both ends.

The shaft, divided by knops, is adorned with roses, the knops bearing the arms of the donor and etched line drawings representing the chief industries of the town (bell casting, hosiery and engineering).

The mace head bears the royal arms on one side with those of the borough on the reverse, both executed in enamel and is surrounded at the top by a circlet of alternate crosses and fleurs-de-lis, out of which spring the four arches of the crown, surmounted in the midst by the figure of a lion rampant. 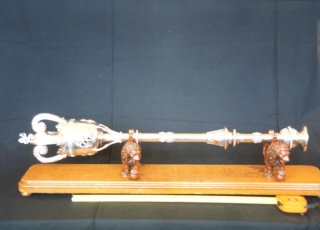 When carried or resting, the mace is shown with the borough coat of arms facing forwards, indicating that the Mayor is presiding.

Should a member of the Royal Family be present then the mace is turned to show the royal arms, or in the presence of the sovereign it is carried upside down to demonstrate that in the sovereign's presence the delegated authority it represents is redundant.

Maces were originally primitive weapons of war and the Bayeaux Tapestry clearly shows one being wielded by Bishop Odo of Bayeaux. The mace is the only weapon approved for ecclesiastics to carry.

In later years, maces, in the form of a heavy club embellished with spikes, were carried by bodyguards before wealthy and important people. Further information on the history and use of maces is available from the Guild of mace bearers.