Home » Mayoralty » History and insignia » The Mayoral chains of Office

The Mayoral chains of Office

A Level 3 heat-health alert has been put in place by the UK Health Security Agency. Advice and guidance for the hot weather can be found at www.charnwood.gov.uk/heat.

As the weather is expected to reach 30°+ this week, the council’s Severe Weather Emergency Protocol for rough sleepers has been activated, meaning the council are working with partner agencies to identify and arrange emergency shelter for individuals who are rough sleeping. Full details. 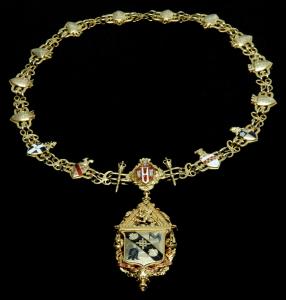 The Mayor and Mayoress are both provided with magnificent gold chains of office to wear whilst on official business.

They are looked after by the Mayoral Officer and are never stored at the Mayor's house.

The Mayor's 18ct gold chain was presented by Alderman Joseph Griggs, the first Mayor of the Borough of Loughborough, in 1888. 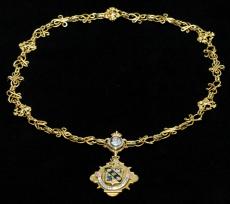 The Mayoress' chain was presented by Alderman Hiram Coltman, who was the Mayor in 1896/97, and commemorates Queen Victoria's Diamond Jubilee celebrated that year.

Twenty diamonds surround a cameo of Queen Victoria, which is believed to be unique on a Mayoral chain. The interlinking on both the Mayor's and the Mayoress' chains takes the shape of the letter L for Loughborough.

Other badges of Office